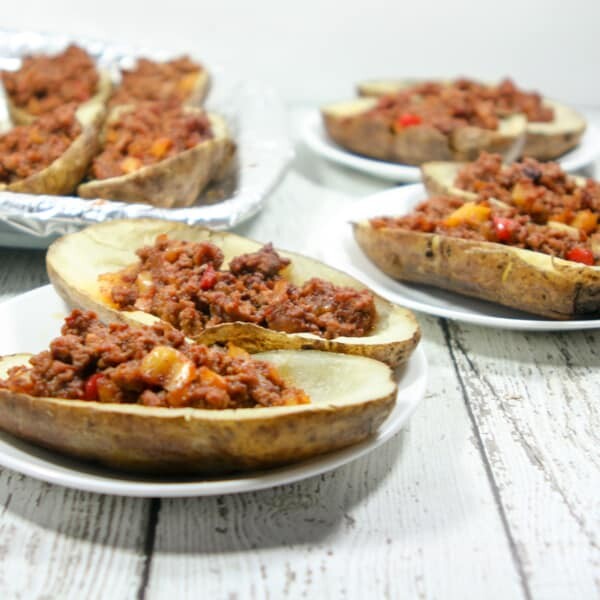 With the sweet + spicy Sloppy Joes offsetting the salty + crispy but yet “buttery” potato skins, these Whole30 Potato Skins = an explosion of flavor! You won’t believe they are Whole30-compliant!

Note: If you purchase a product through a link provided in this post, I may receive a small commission to support blog expenses. For more information, see my Privacy Policy.  All opinions expressed are my own. Thank you for your support!

On Sunday, I told you about the yummy Paleo and Whole30 Sloppy Joes we had last week. I made a double batch of them, and we ate on them all week long. I was thrilled with the way they came out. They’re so much better than any Sloppy Joe I ever had as a kid, and they’re healthy to boot! 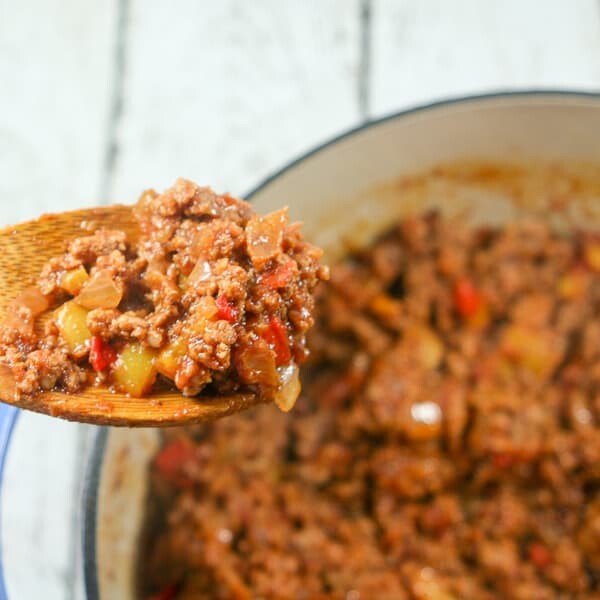 We had the Paleo and Whole30 Sloppy Joes a couple different ways. The first day, we just ate them scooped into a bowl. To change things up later in the week, I served them over sweet potatoes and then zoodles.

But today I’m going to tell you my most favorite way to have them. Spooned into potato skins.

That’s right! I hollowed out some baked potatoes I made a couple days earlier, brushed them with a mixture of ghee and light olive oil, sprinkled some sea salt on the insides and baked them again until warm. If you can’t tolerate ghee, just use all light olive oil instead.

I like to use light olive oil in recipes such as these because it has a higher smoke point and a lighter flavor than EVOO. 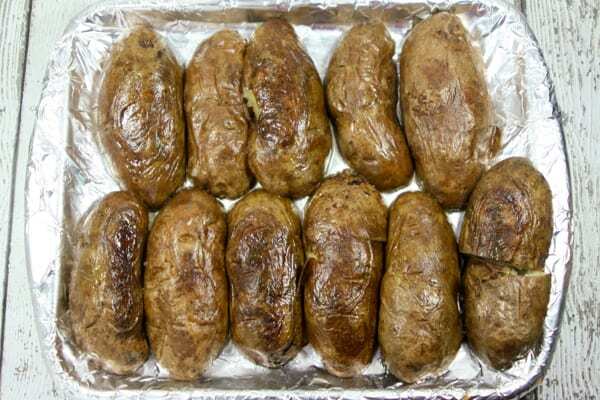 Once the bottoms were crispy, I flipped them over and baked them a few more minutes until the top edges were browned. 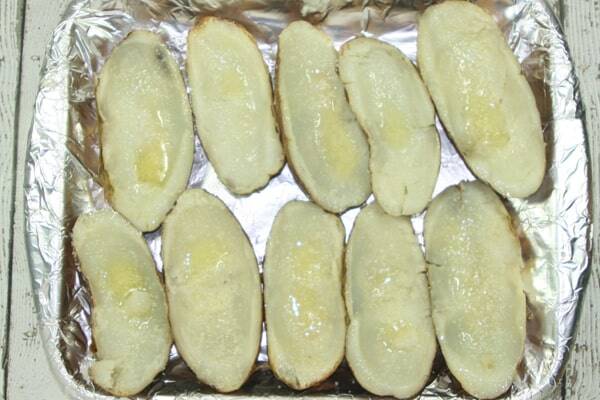 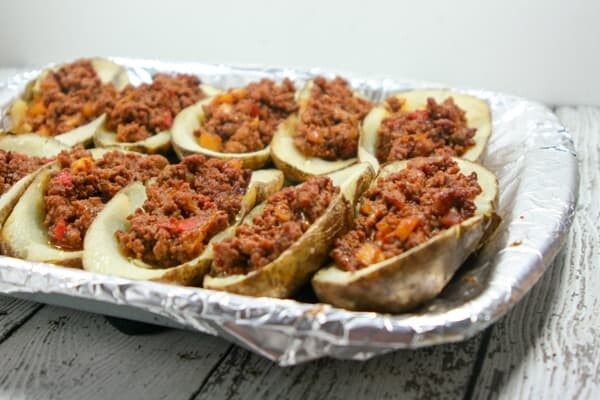 The result was incredible! Sweet + spicy Sloppy Joe combined with the crispy, salty, buttery (well, ghee-y) potato skins = pure magic! Trust me when I say you’ve gotta try these! If these Whole30 Potato Skins sounds tasty, make sure to check out my Whole30 BLT Potato Skins too!

Prep and cooking times do not include the baked potatoes or Sloppy Joe mixture. I love to use leftover baked potatoes for potato skins and leftover Sloppy Joe mixture for these tater skins in particular. I like to buy ingredients for my Homemade Ketchup, Sloppy Joes and these Whole30 Sloppy Joe Potato Skins, doubling the first two recipes, so I can have a couple days’ worth of meals. If you are baking your potatoes as you make this recipe, see below for tips.

Tips for baking the potatoes (adapted from America’s Test Kitchen baked potato recipe): Pick potatoes that are similar in shape and size for uniform baking. Preheat oven to 450°F. Submerge potatoes in a salt water solution (2 tsp. per 1/2 c. water) and place on a wire baking rack set in a rimmed baking sheet. Bake until potatoes reach 205°F. Use a digital thermometer to be sure. Remove potatoes from oven and brush their surfaces lightly with ghee. Place back in the oven for an additional 10 minutes to crisp. Remove from oven and poke a couple holes in the top and bottom of each potato to release steam.

If you do use the method described above, be sure to add the ghee and salt into your nutritional calculations if you’re counting.

If you’re new to the Whole30, make sure to check out my Ten Must-Have Whole30 Convenience Products and 10 Best Kitchen Gadgets for Your Whole30 posts! 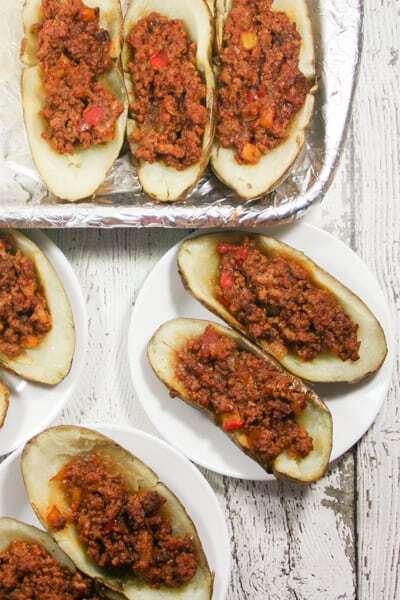 I hope you love these Whole30 Potato Skins as much as we do! Don’t forget to Pin this recipe for later! 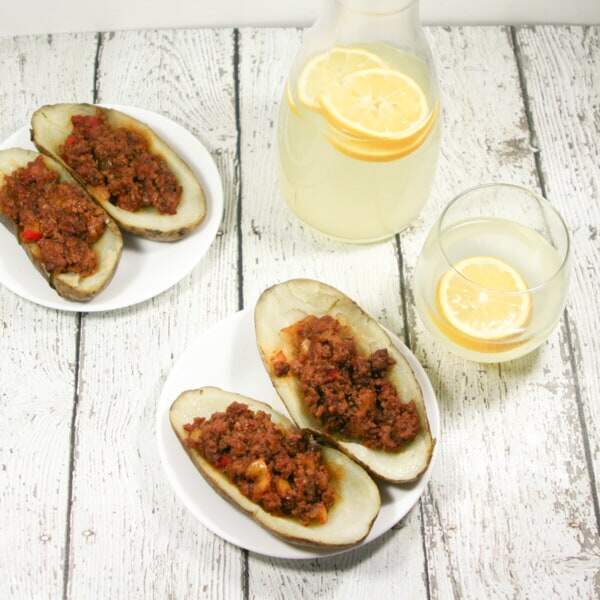 We love to eat, travel in our camper, cook, spend quality time with our family, and enjoy life on our farm. We have four kids, a Doodle, two Chiweenies, and a cat.

We create and photograph low carb recipes from our home in Knoxville, Tennessee. We believe living a healthy lifestyle doesn’t have to be expensive and time-consuming, so we strive to create simple and delicious low carb recipes.